Primary and intermediate school principals have voted to accept a new settlement from the Ministry of Education, which includes entrenched pay parity with secondary principals.

The settlement will ensure primary, intermediate and secondary principals of similar-sized schools will receive the same base salary, across key components of remuneration.

NZEI Te Riu Roa President Lynda Stuart said it had been a long and gruelling campaign, and she was proud of the way members had stayed united and held out for a fair offer, despite the personal cost.

It was the sixth offer to principals since collective agreement negotiations began on 16 April 2018. During that time, principals held three strike days alongside primary teachers, including one on 29 May this year that included secondary and area school teachers.

Following the 29 May strike, primary and area school teachers accepted new offers that gave them parity with their secondary colleagues, but primary and intermediate principals voted to fight on. They took partial strike action from 8 July until 16 August, in which they disengaged from Ministry meetings and communication.

Ms Stuart said pay parity with secondary principals was simply a matter of fairness, and it was crucial to get an agreement that would make it worthwhile for senior teachers to consider moving into a principal role.

“This settlement of course doesn’t address all of the issues we face as principals, and work will now begin in earnest with the Ministry and PPTA Wehengarua to make progress on the accord that forms part of the terms of settlement,” she said.

The accord will focus on appraisal, teacher only days, wellbeing, workload and the complexity of the principal role. Read the accord here.

Ms Stuart said she especially wanted to thank school whānau and the wider public who backed teachers and principals through this campaign.

“They understood the workload issues educators face, the difficulties around recruitment and retention, and the impact that has on students. They supported us all the way and it made a real difference to the outcome,” said Ms Stuart.

“The Ministry is pleased that primary principals have voted to settle their collective agreement out to 25 August 2022.”

Negotiations for a collective agreement for area school principals are in the early stages.

NZEI Te Riu Roa has now completed the assessment of the role of teacher aides and the four comparator groups. Work is now underway to set the parameters for pay equity negotiations with government.

The key components of the offer that primary and intermediate principals accepted are:

• Pay parity with secondary principals across the roll, staffing and decile components of remuneration, with this being entrenched through a unified pay system.
• Principals of the smallest U1 grade schools (up to 50 students) rolled into the U2 grade on the pay scale
• Additional funding to ensure at least two adults in every school during the school day
• Beyond an initial increase to achieve parity, there is a 3% per annum pay increase for three years on the roll and staffing components of remuneration
• A one-off $1,500 (before tax) payment to NZEI Te Riu Roa members
• An annual $300,000 professional development fund for primary principals
• A three-year term for the agreement

You can read the full terms of the settlement HERE. 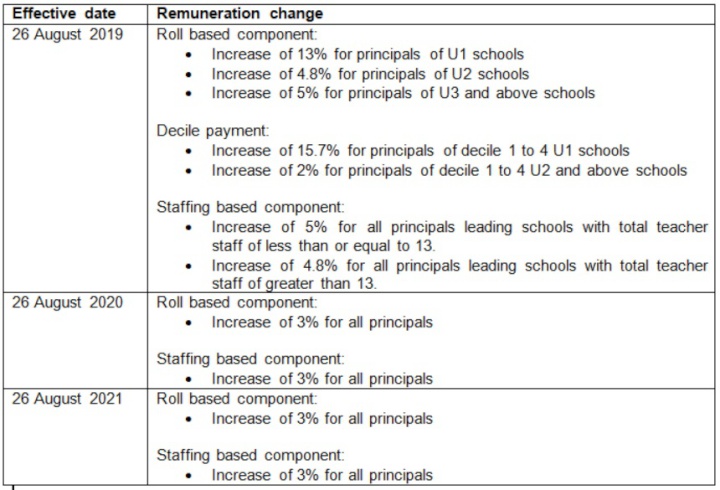 Click here to see a timeline of the Kua Tae Te Wā campaign, since planning began at NZEI’s 2017 Annual Conference.

Weaving wellbeing into your school

Auckland’s LEOTC community is ready for you