When the lunch bell rings on Wednesdays at Parakai School, eight students head straight for the gate, cross the road to Te Whare Oranga o Parakai and start work in the community centre’s commercial kitchen.

These students, seniors at the decile three school, are the first participants in the school’s cooking club, instigated and operated by local chef, Keryn Reardon. Ms Reardon is the kitchen manager at Te Whare which is owned and operated by the Helensville District Health Trust. Each week, her class “travels” to another country using food as their mode of transport. Week one was a trip to Italy preparing a menu of caprese salad with grilled zucchini and basil pesto, week two a taste of France with poulet le cordon bleu, baked ratatouille with sage & black boy peach jus – all prepared from ingredients sourced from their locality of rural Helensville.  The Italian adventure called for fresh mozzarella and a local variety was used.

The club is designed to complement the school’s technology programme by providing students with real world experience. It’s also about broadening their horizons by exploring the world through food.

The lesson starts with discussion about the country of the week, where it is, the language, the climate and how this influences the way of eating – and the all-important recipes. Ms Reardon is ready with fresh produce and students learn about the advantages of buying locally and using seasonal recipes. Participants in the winter season, for example, will prepare risotto fungi with truffle oil and parmesan when they explore Italy compared with the salad and pesto of the summer.

So far the club has travelled to Italy, France, Spain, Turkey, Vietnam, China, Mexico – and back home to Aotearoa where the menu prescribed kumara rosti with silverbeet, garlic & crème fraiche and rosemary chargrilled chicken. Most sessions are a race against the clock, again like a working kitchen, and students take their food home to eat with their families. 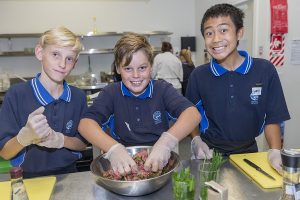 They are also taught how to substitute ingredients, for example using potato or courgette instead of kumara in the rosti, and in general to be budget conscious – just as in real life. “My focus is to limit the use of processed foods and to teach children what is in their food, to recognise which foods are in season and what they can be used in. This is key in running an efficient home.”

Each student pays a token fee of $5 per lesson, with the rest of the cost – ingredients, staff, facility hire and photocopying – covered by a $5000 grant from the Helensville Lions Club. President Mike O’Neill says the club was impressed by the programme’s commitment to diversity and the local community. “We are trying very hard to identify more with youth as we are the older generation and we are not the future, they are. We think it’s a very constructive way to teach kids about other countries and the different ways that people live.”

However, the biggest benefits appear to be growth in the students’ confidence and sense of belonging. “The close and supportive working environment of the kitchen is especially beneficial to students who are ordinarily very quiet, the sort you don’t really ‘hear’ because they lack personal confidence,” says principal Nick Neubert. “They have a very safe place in which to be themselves, and every time they return from cooking club they are buzzing. Similarly, the confident students have an opportunity to shine but in a way which is supportive to others.” 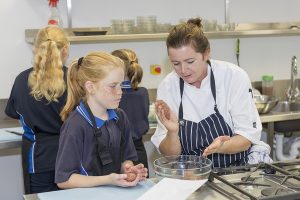 The teamwork aspect is particularly important in the kitchen. “If you see something boiling over, you speak up. You can’t just leave it because it’s not yours,” says Ms Reardon. “It is a professional kitchen, there is an etiquette to follow and the children are involved in every aspect of preparation and clean up. They call me ‘Chef’, we are continually washing our hands and they learn to manoeuvre hot and sharp objects around the kitchen. We’ve had no incidents apart from the odd nick to a finger. They listen, and if they don’t understand, they ask.”

Parents report that their children are replicating the meals at home, and also showing more willingness to try different foods.

“Some of the students were hesitant about eating the Vietnamese dish (spring rolls with dipping sauce) because they didn’t like the fish sauce, but my stance is if you cook it, you need to try it. The following week we visited China and prepared a stir fry, again using fish sauce and shrimp paste – and that time they loved it. They are learning to take risks.”

Ms Reardon is employed by the Helensville District Health Trust and is looking to extend the programme to three more local schools.